Exhibition of the week: Vinyetes al front at Picasso museum

Exhibition of the week: Vinyetes al front at Picasso museum 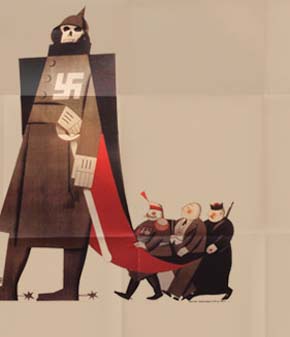 Just after the Spanish Civil War started in 1937, Picasso made The Dream and Lie of Franco, a serial of 18 engravings similar to a comic, in which Franco is reflected as evil person. Until that moment, Picasso never accepted a work with propagandist character, but after being invited to be honorific director from the Museum of Prado in Madrid by Manuel Azaña, he decided to accept a paint about the Spanish reality of that era, and these engravings were the precursors of his painting Guernica. An exhibition entitled Vinyetes al front, now on at the Museu Picasso, goes beyond this interpretation and links the engravings with war propaganda, the language of the period.

The exhibition features works by illustrators, graphic artists and photographers like Josep Renau, Centelles, Bagaria, Grosz and Heartfield, not to mention one of the Malaga-born painter’s sources of inspiration: Goya. Los Desastres de la guerra [The Disasters of War] a run of which was printed in 1937, make their presence felt in an exhibition that goes beyond public debate and which delves deeply into an entire iconography.

Our   are perfect for those who want to visit the different Museums of Barcelona. Remember that the night of 14th is free and 18th May is free too due to the Internacional Museum´s Day.

We use cookies to ensure that we give you the best experience on our website. If you continue to use this site we will assume that you are happy with it.Ok